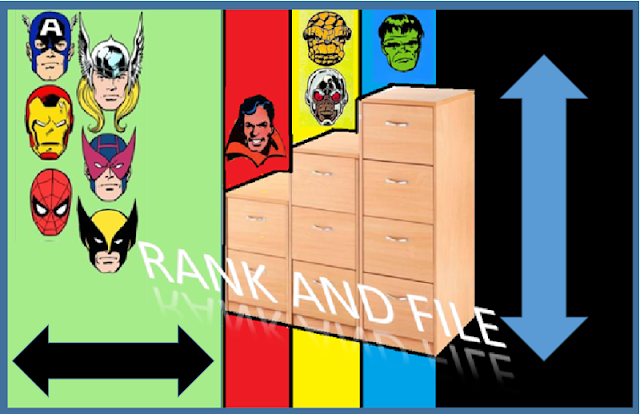 Martinex1:  We at BITBA truly appreciate having viewers from around the world; and we are also somewhat jealous of you that are from a more moderate or even tropical climate.   In the upper midwest of the U.S.A. and much of North America, we have been dealing with horrendous snow, ice, and low temperatures this past week.  You know it is bad when your eyelashes stick together and your cheeks go numb after two minutes of chiseling crystals on the inside of your car window.

In honor of the wintery weather, let's rank the ice based characters and pop culture entities from all genres.   It seems we have a myriad of snow ball throwing terrors and zero degree denizens to choose from, so give us your top three favorites (including the reasons why) and also list one who just leaves you cold.

Here are my selections:

1) Captain Cold: Leonard Snark is one DC character and villain that I have liked for a long time.  I cannot remember exactly when I first encountered the cold criminal (it was in a Flash comic when the rogues teamed up), but I was fascinated by him from the beginning.  I liked his design with Parka hood and the goggles.  He didn't look like anybody else and he used his gun in dangerous and creative ways.   Sometimes ice characters can seem one note, but Captain Cold always seemed like a serious adversary.  I actually bought DC books when he was on the cover.
2) Killer Frost: What?  Two DC Characters on my list?   Has my brain been addled by the -15 wind chill?  Nope - not at all.   I recently reread some Fury of Firestorm issues while preparing for some posts and I have to say that I liked the Killer Frost character.   She was different than other villains and had a weird fascination with her heroic enemy.  And for a female character in the late 70s and early 80s, she was quite powerful, dangerous, conniving, and complex.
3) (Tie) Slurpees and Icees: Okay I know these are beverages and not characters, but I did say "pop culture" and these delicious drinks literally give me a headache even on a hot day!  Favorite flavors:  Cherry and Blue Raspberry!

As far as the worst (in my opinion), I never thought Bobby Drake / Iceman was used to his potential at all.  I am not saying he couldn't be a great character; he was an X-Men after all.  But I don't think any writer or creative team ever found the proper voice for Bobby in the Silver and Bronze Ages.  He could have used his powers in so many strange and wonderful ways, but he was relegated almost to teenage sidekick status and never emerged from the D List.  From almost every standpoint, the character never cut it.

So what do you say?  Here are some photos to get your brain boiling; you may be surprised how many cool characters there are to draw from.   Cheers! 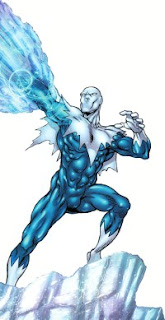 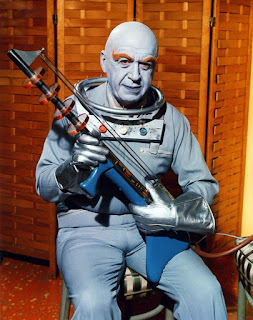 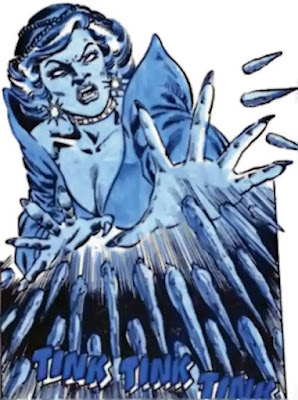 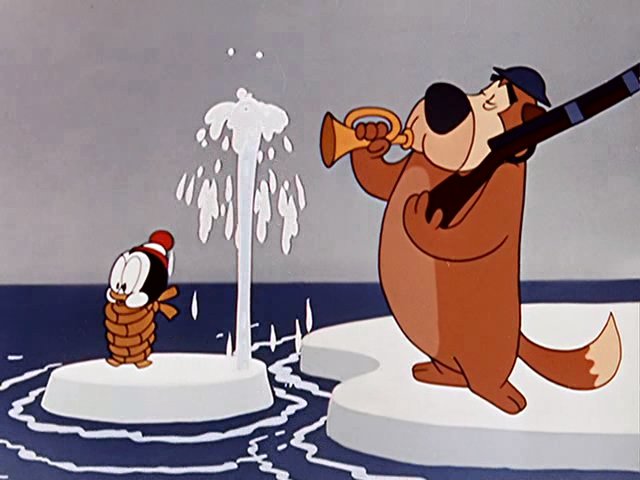 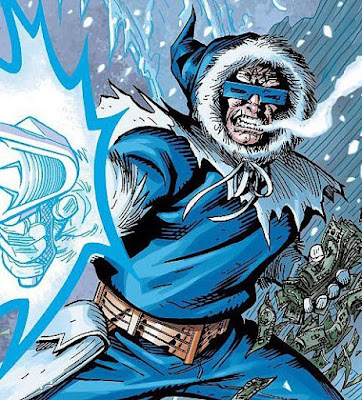 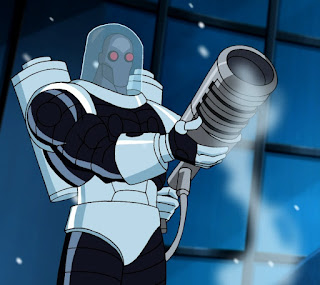 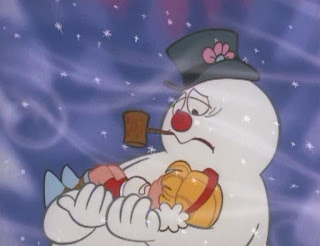 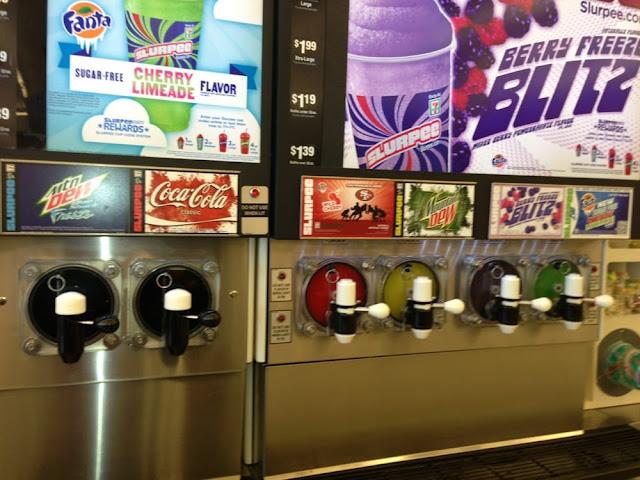 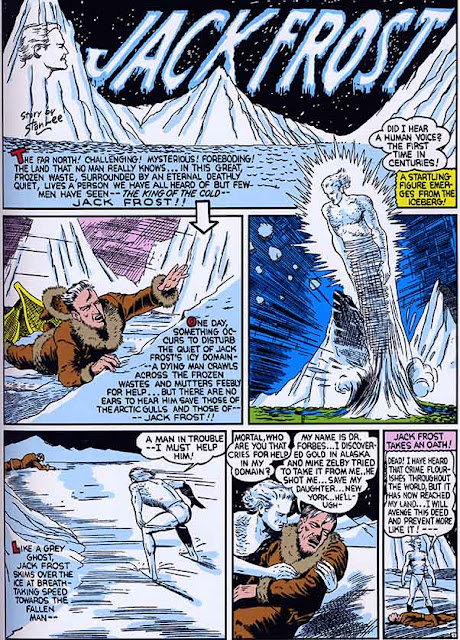 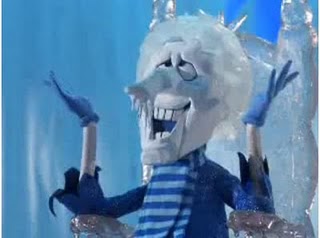 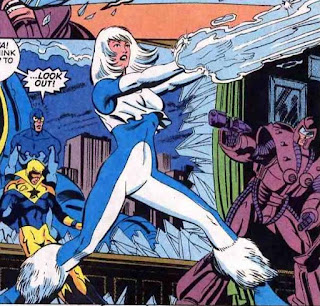 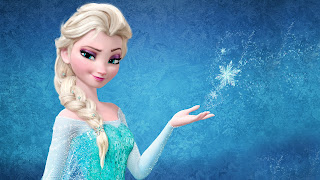 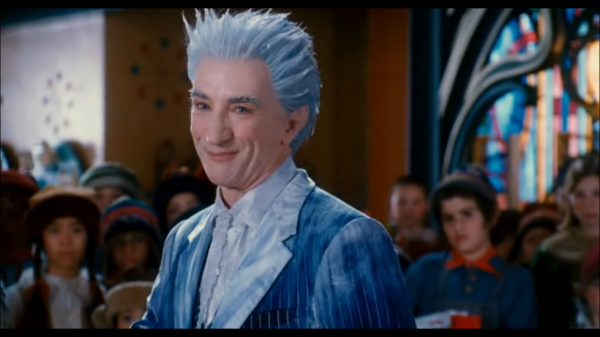 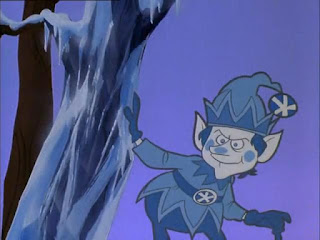 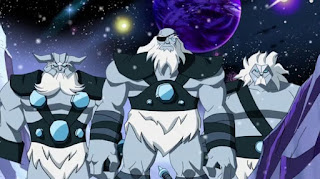 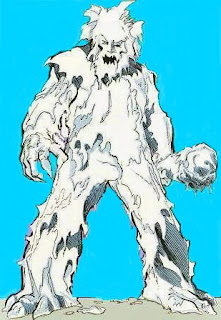 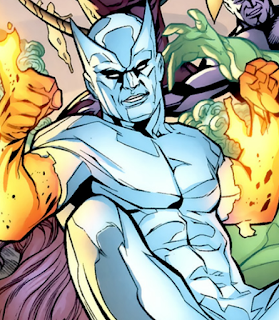 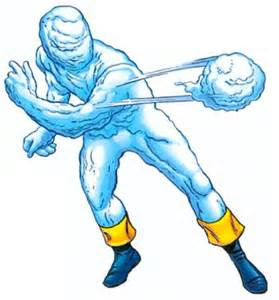 Actually, I'd love to see some snow. Here in the UK we are on the same latitude as Canada but thanks to the effects of the Gulf Stream our winters are usually far milder than they should be for our northerly latitude. I don't even bother putting the heating on in my house and I can wear a T-shirt indoors most of the time. Anyway, here are my top 3 :
1) Sam The Snowman from Rudolf The Red Nosed Reindeer. I know Rudolf has been an annual classic since 1964 but sadly not on British TV where it has rarely been broadcast. I've only been a fan since 2011 but I watch it every year on YouTube and I love all the characters and songs.
2) The Frost Giant's Daughter because I'm a big Conan fan.
3) The Yeti because who doesn't like The Yeti ?
And the one I have no interest in - Iceman because the original X-Men are boring, always were and always will be.

It's interesting now that you mention it how the ice villains seem to be much better as characters than the heroes. I agree that Bobby never did seem to hit his stride and still hasn't, but Ice anyone? Seriously, and Icelandic snow heroine teamed up with a Brazilian fire heroine just so they could be Fire and Ice? My choices would be:
1) Doctor Freeze from Batman: The Animated Series. A tragic and compelling back story and a fate I didn't see coming, but which makes total sense. Of course DC later had to ruin it in the books, but I think it's the best interpretation of the character.
2) Captain Cold. I haven't read much about him in his early days, but he must have had potential as he's really come into his own recently, both in the books and TV. His recent takedown of Johnny Quick was absolutely fantastic.
3) And keeping with the treat theme, I'd have to go for Freeze Pops. After a hot day playing baseball, nothing better than to go down to the White Hen to pick up a comic and that long frosty deliciousness.

It's been pretty chilly over here, too - although snow or any other precipitation (yet). Around Zagreb, though, it's been really gloomy and foggy, which has the pleasant side-effect of creating hoar-frost; the entire area where I live looks sugar-frosted every morning (posted a bunch of pics on my FB page).
Anyway, I like Killer Frost, too. One of my favorite ice-maker characters.
A few other favorites:
1. Popsicles (any flavor)
2. The Abominable Snowman from Monsters Inc. It was a brief appearance (check out this YouTube clip: https://www.youtube.com/watch?v=mPOsAn-e-H8), but he was hilarious (they should make a whole movie just about him).
3. Snow Miser (he's too much).
4. Soft-serve vanilla ice cream.

1) Otter Pops! (so cute and delicious)
2) Bobby Drake aka Ice Man!
3) Wampa (from the Empire Strikes Back)

Wampa? Really, Osvaldo? You hardly even get a good look at them. But you reminded me that I kind of like the tauntauns - wouldn't mind having one of those to ride around on...

It's been cold here along the Ohio River, Edo, but not a whiff of snow yet. I think we got some of your hoarfrost this morning; froze my car doors shut.

"The Bumble Snow Monster" from Rudolph. He can put the start on your tree, roar nastily, and bounce off a cliff!

Kool Pops- they got me through many hot summers as a kid...

I kinda liked Fire and Ice; their friendship seemed genuine the way DeMatteis wrote it (though I could never understand Ice's attraction to Guy Gardner).

What else? Well, I used to eat Popsicles (and Creamsicles) by the boxfull. As for other cold-based characters ... I'll agree Killer Frost was cool (ha!); I'm wondering what they'll do with Caitlin on the Flash TV show. I hope they don't make her go full-on evil, but still let a little of the bad girl out from time to time.

Huh. I'd forgotten that Iceman used to look like a faceless snowman dude, with boots. They shoulda left him like that! Kinda creepy lookin'.
I always liked Captain Cold. He wasn't a maniac and he didn't wanna rule the world. He just wanted to make a dishonest buck or two with jewelry store robberies and the occasional hijacking. Nothing heavy.

There is a lot of love for Captain Cold out there. I think ice characters might fare better as villains because their powers are fairly one-note and limited, so in smaller doses they might be better. Although good writing and characterization always helps.

Thanks for playing - nice choices everybody - and a couple I hadn't even thought of... how could I forget the Yeti or Sam?

Hey Edo - I'm glad you like vanilla soft serve; I make my living because of that product. Keep on eating! Cheers!

Growing up in Southern California, my familiarity with snow is limited to a couple of occasions, and it hasn't improved since moving to Arizona. Unfortunately it's been unseasonably warm this December, so instead of highs in the 50s/60s, we're getting low 70s. Kind of a bummer. Anyway, as far as cold characters go, gotta also give a shout out to frost giants in any medium - I just love the idea so much. For super-heroes/villains, I'll give it to Iceman. He has had his share of ups and downs, but he always was a team player. Finally -polar bears! These beautiful creatures are in some jeopardy as their environment has begun to diminish. I hope they don't disappear with the ice...

Gee Martinex1, sorry to hear about the crappy weather up in your part of the woods. IIRC, last year's winter was unusually mild because of the El Nino phenomenon, so I guess this year Father Winter would return with a vengeance. Stay warm guys!

1) Ymir - gotta love those frost giants! Like Karen, I have a soft spot for Thor's icy foes.

2) Killer Frost - I actually still have the issue in which she first appears in Firestorm's short lived original series back in the 70s.

3) Iceman - yes, yes, I agree that Bobby Drake's character has been underdeveloped throughout the years but I still like his adventures with the X-men. He reminded me a lot of a much more popular teen superhero, Peter Parker, aka your friendly neighbourhood Spider-Man. Both were teenagers who possessed superhuman powers but still struggled with daily life nonetheless. I can only dream about how Iceman would have been a different character given more exposure and a good creative team.