Adventures in Comics: Back to School, With Comics or Without? 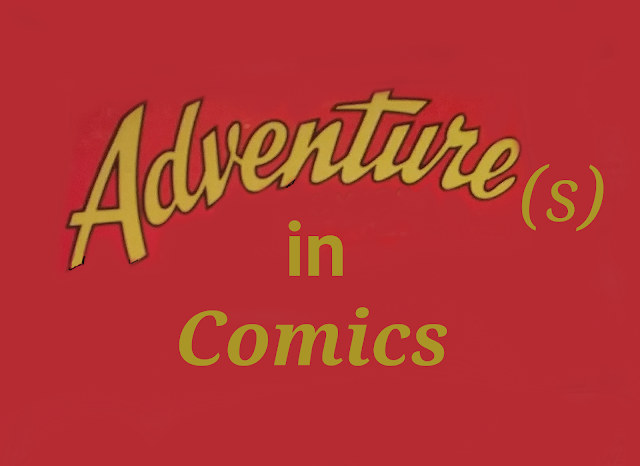 Redartz:  Well, summer is on it's last few weeks, autumn is getting warmed up (or should I say cooled down). The kids are back in school, and time continues to march ever forward. I always get a bit nostalgic as fall approaches (some might say maudlin). So it seems a good time to reflect back on the start of school during our Bronze Age.

In the course of some  recent discussions here at BitBA, several have commented that the return to school, or more specifically, the start of college, curtailed their comic book reading. In my instance, that wasn't the case; it actually increased the collecting fervor.  I was fortunate enough to be attending Art School, in  hopes initially of becoming a comic book artist. Soon enough I realized my figure drawing skills were hopelessly inadequate, but I found other creative avenues, and completed my BFA. More importantly for our discussion, I was suddenly surrounded by like-minded people:

creative types, comic fans, music aficionados, D&D players, the whole bit. It was much like heaven.

From the first year, all of the comic fans gravitated together. Every week we'd pile in somebody's car and head for the local comic shop, and cough up scarce funds for some four color inspiration. And that local comic shop was an excellent meeting place, near a record store, near a McDonald's , near a cheap used clothing store, and also an occasional visiting place for Roger Stern.


Later on, we'd crash at someone's apartment and discuss art, politics, music, and frequently comics. I wasn't the only one hoping for a career in comics, one of our group actually made it professionally. Several others are active in commercial art, and one is big in rpg's and cosplay these days. It was amazing and rewarding, having so many friends around with which to talk comics, seriously talk comics (in those days long before sites such as this one). Even birthdays were part of the fanfest- several of us chipped in one time to buy a member of the group the Spider-man drug series (ASM 96-98), as he hadn't read it.

Another time, several of us did pencil drawings of our favorite superheroes, and passed xeroxes around for everyone else to ink (we had hopes of starting up a fanzine or comic- never got off the ground, but a lot of fun was had). Learned I'm a better inker than penciller...

Then there was the time a group of us hit the road together to the Chicago Comic Convention. If there's anything better than four college buddies hitting the Big City for comics, food and fun, I'd like to hear about it (a highlight: a late night at the Palmer House with fellow comic fans watching an animation festival, including a bunch of classic Betty Boop shorts).

Although, come to think of it, hitting the Big City with several blogging buddies was pretty top notch fun too.

Anyway, the long and short of all this: by having so much reinforcement around, my comics years were extended by a long shot. Had I attended a technical college, or  majored in Astronomy, those comics I loved for so long might have been left behind long before they were. And even more, those shared times resulted in lasting friendships that remain yet  today. Looking back, I realize how incredibly fortunate I was...

Okay, enough about me. Let's hear your story. When you started college (or high school, or the military, or whatever road you followed to your future), did your comics go along? If so, in what way? If not, was it hard to let them go? What brought you back? Time for 'telling tales out of school'.
Posted by Redartz at 6:00 AM 10 comments:

Email ThisBlogThis!Share to TwitterShare to FacebookShare to Pinterest
Labels: Adventures(s) in Comics

Two Questions: Comics You Grew to Love, and Early Toys 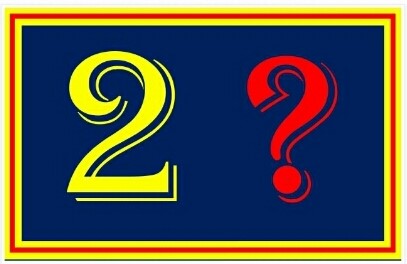 Redartz:  For your consideration today, here are two questions that will require you to think back a bit (one much further than the other, admittedly). Let's get right to them:

1.  Was there ever a comic book, series, character (or creator) that you initially despised; then later came to appreciate, even love?

2.   What is the first toy you remember having as a child?

As is our custom here, I'll give my answers to get things started. 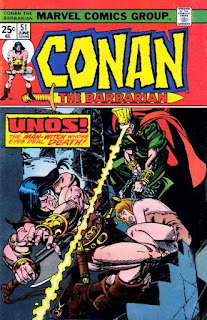 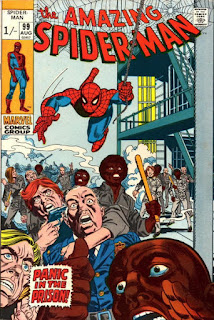 1.  Anything by Gil Kane. No, it was nothing personal; I just didn't like his artwork at all. When I first started reading comics, his covers were everywhere on Marvel publications. I just couldn't get past the nasal shots and sometimes contorted positions. And , it seemed many of those covers looked alike, especially the Conan covers. However, over the years, his style grew on me. By the time his stint on "Sword of the Atom" appeared, his art became something to look forward to. And he is my favorite penciller, under the inks of John Romita Sr, when it comes to the web slinger.


2.   The first toy I can recall having was a plastic clock. You know, the kind where you can move the hands around. It was green, and had see-through innards. I remember holding it on my parent's couch at the age of two. Can't remember much else that early, that toy clock must have been pretty important to me at the time...

Okay, now it's your turn- stretch that memory, think back, and remember! 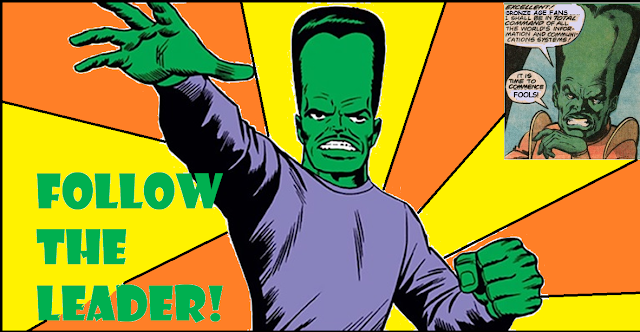 Martinex1: Put one foot in front of the other... and Follow the Leader!  Every Tuesday at BitBA we turn it over to you, the faithful readers for an unplanned conversation.  Have fun and keep it interesting.   Cheers!
Posted by Martinex1 at 6:00 AM 14 comments: 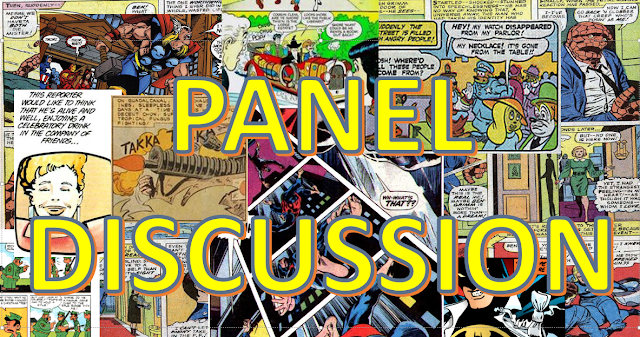 Martinex1:   As you probably know, today is the 100th anniversary of Jack Kirby's birth.  Born Jacob Kurtzberg on August 28th, 1917, he would grow to be perhaps the most influential comic artist of all time.   In 1936 he started in the comic field and he worked nearly continuously until his death in 1994.  With an unparalleled imagination and a style all his own, he carved his way into modern comic lore, leaving behind countless pages of unbridled creativity.

I think it fitting, as much as possible, to let the art and photographs speak for themselves today.   So here are various examples of cover work throughout his professional years (covers starting with his first cover Red Raven in 1940 and running through 1989*), examples of his most dynamic two-page spreads, a couple collages, self-portraits of the man, photographs through the ages, and a few more special selections.

*I apologize that some of the covers are out of order - the system was giving me trouble arranging the items.

I have grown to really appreciate Jack Kirby's art and influence, and even as I pulled together today's artwork I was astounded at how much he created.  There were books I had never seen before.  And I spent hours just looking at collections of pages.  People talk about the "Kirby Krackle" and it seems fitting because energy seemed to run rampant through every panel Kirby touched. 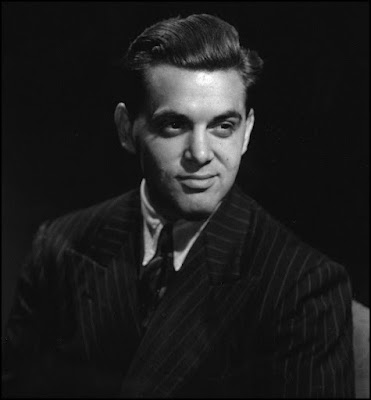 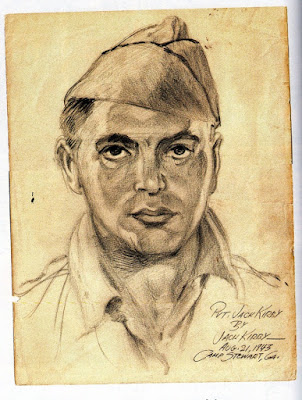 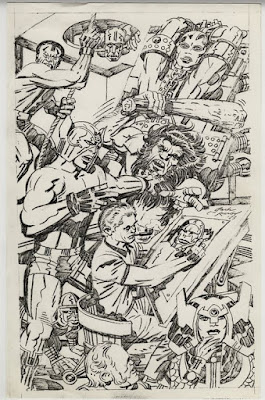 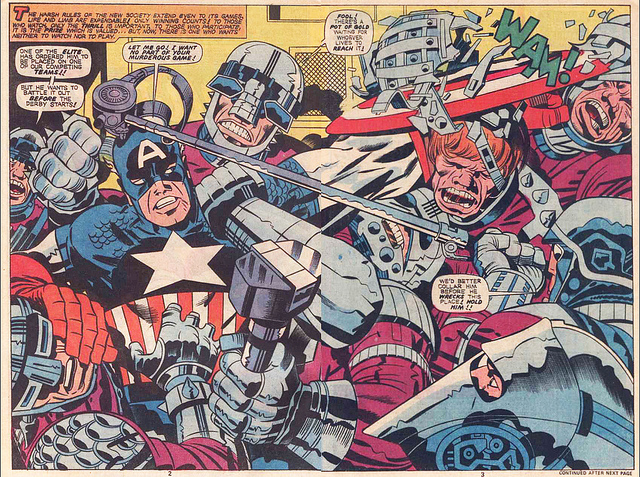 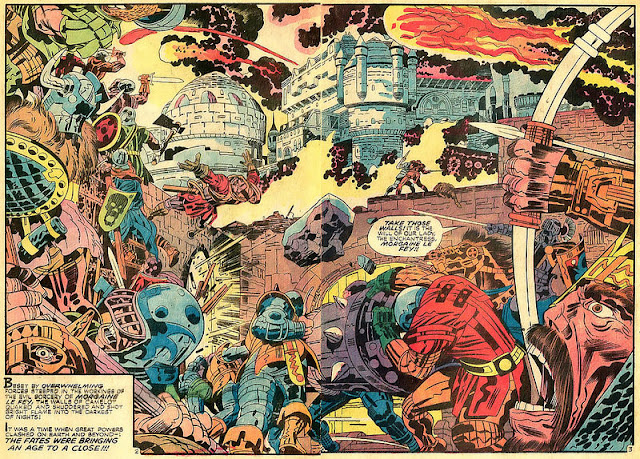 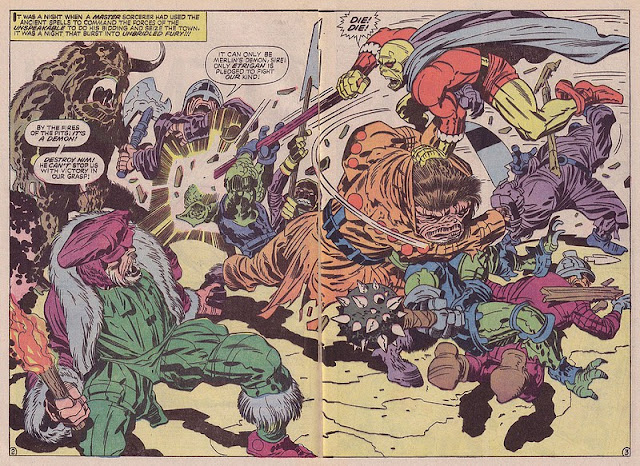 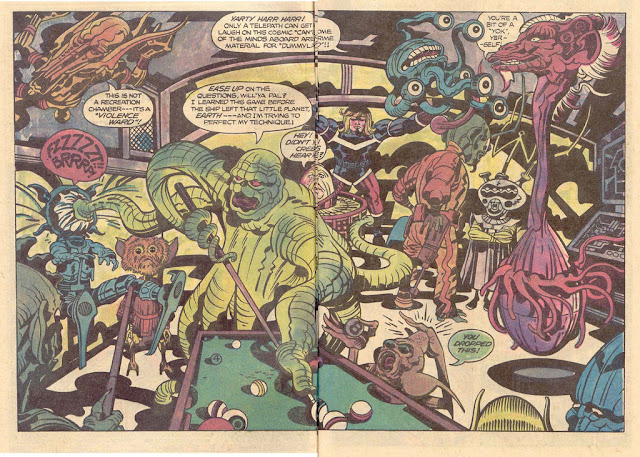 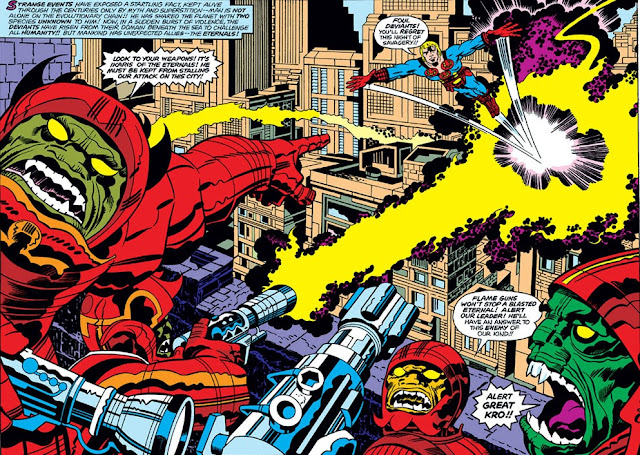 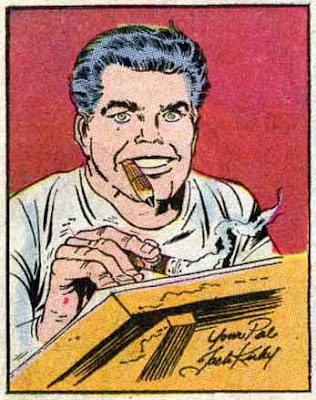 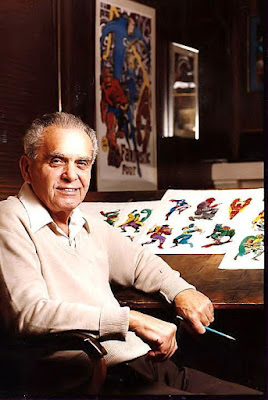 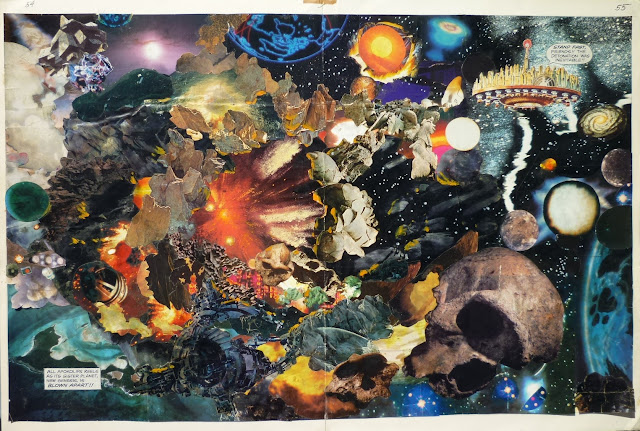 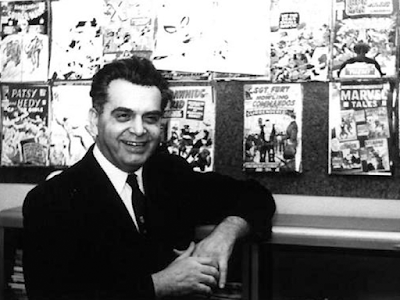 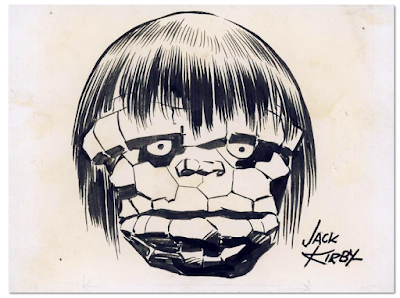 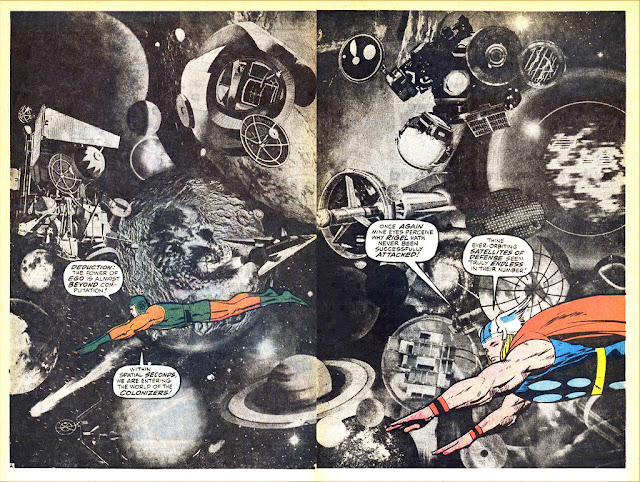 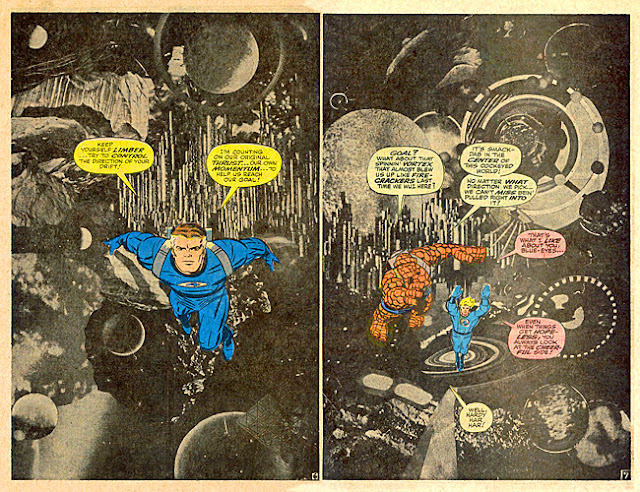 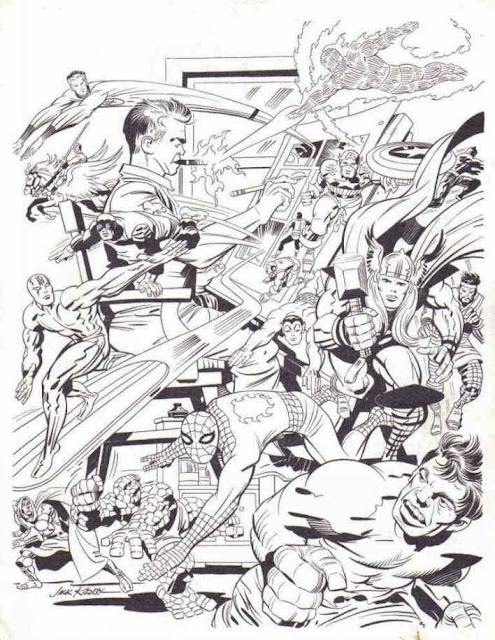 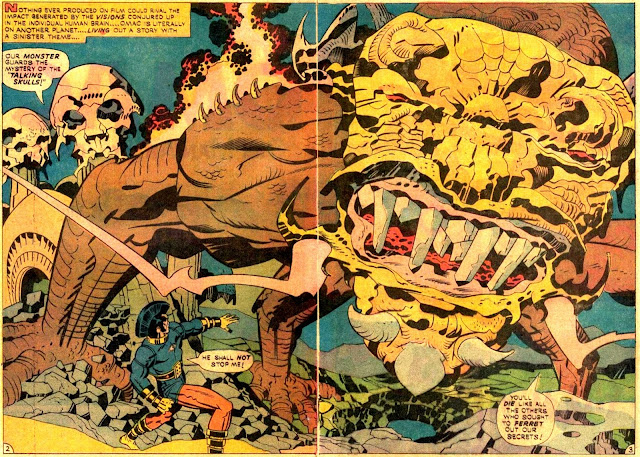