Adventures in Comics: The Things I Didn't Buy... 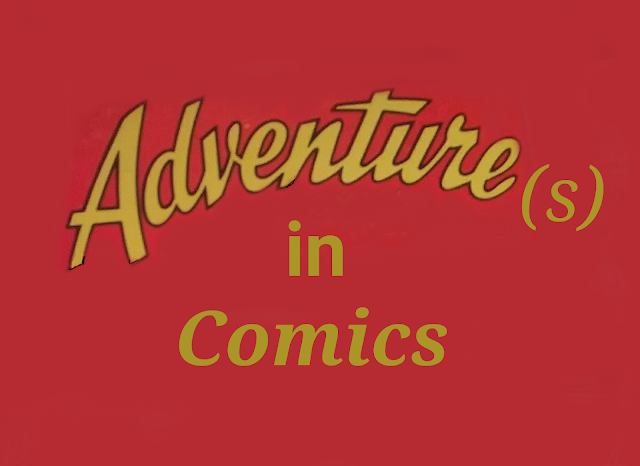 Redartz:  One thing every collector (of comics, ballcards, antiques, or whatever) loves to do is talk about the finds they have made, the purchases they have indulged in while on the hunt. We here have certainly done so, on several occasions. Well today, we'll talk about things we saw but chose to pass on.

Anyone familiar with us here at BitBA knows I love  a good flea market excursion. Like an Indiana Jones treasure expedition, but without the snakes and gunfire. You truly never know what you'll see at these events. Many things you'd love to take home, others you wouldn't be caught dead with. Here are a few things that caught my attention recently: 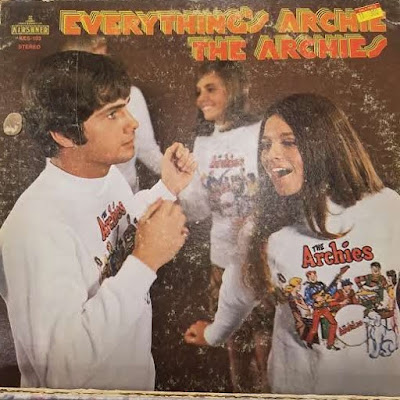 Love this Archies LP; but condition of the vinyl was a factor in passing it up. Nonetheless, I was tempted to buy it just for the cover. Had to photograph it, at the very least... 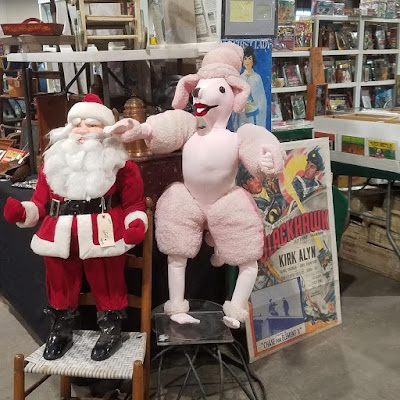 Not really sure what this is, or why Santa is standing still for it. But after being somewhat creeped out by it, I had to get a shot of it. Although I wouldn't put this pink...whatever...in my living room, the Blackhawk poster behind it might be a different matter. 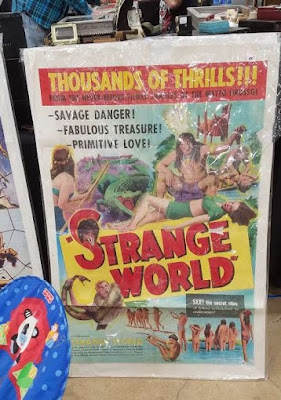 Speaking of movie posters, this one is great. Very odd; perhaps if I'd had some of that Fabulous Treasure I would have been able to take this one home.... 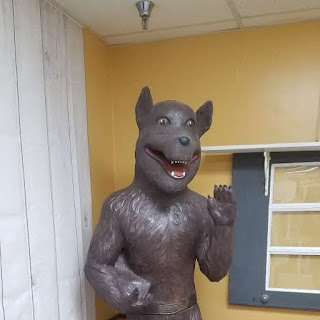 Werewolf delivery man? I don't know, but this 6 foot tall nightmare totally dominated this corner of the room he dwelt in. I'll be seeing him in my nightmares from now until doomsday. 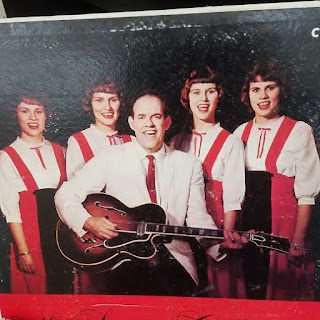 Another stop by a vinyl lp booth, rifling through the covers revealed this toothsome group. Hootenany, anyone?


Fear not; the flea market trip wasn't a washout at all. I took home several nice CD's, and a small stack of comics, including a cool 1961 Strange Tales (rough shape, but a fun pre-Marvel monster cover). But sometimes there's fun in what you skip. Have you any tales of oddities found 'on the hunt'?
bbb
Posted by Redartz at 6:00 AM

The pink creature standing next to Santa is possibly a poodle..?

Several years ago, the HOT TOPIC at Arundel Mills Mall (near Baltimore) had GORGEOUS light denim jacket that was entirely printed with panels from Marvel comics. It was a touch pricey (as things in that store can be), but had been marked down considerably. It was a busy day of Christmas shopping, tho, and it was hard to justify getting that for my own self, really. Plus, I wasn't given much time to ponder over it, as my then-tween daughter was MORTIFIED beyond REDEMPTION that here was her doofy, embarrassing Dad, hanging out in a store that was SUPPOSED to be considered a "No Parent Zone". . . AND he was actively shopping for stuff and looking at merchandise. It's easy to miss these crimes against nature and humanity when you're distracted by thoughts of quickly sneaking a clandestine Cinnabon once the shopping party splits up. . .

And-- the jacket was long gone when I came back looking for it after Christmas. . .

Colin, I was assuming the pink thing was a sheep. It looks like the result of Shari Lewis's worst ever acid trip.

...I would *love* one of those sweatshirts those kids on the cover of the Archie album are wearing...

As for the main topic of this post, I have to say, I love going to flea markets and even antique shops, but just to look at all of the stuff. I rarely have the urge to buy anything outside of any cheap books or comics I may come across.
The closest, recent near miss I had was the summer before last, when I was visiting family in Oregon, and stepped into a cool antique mall in Salem. I came across a really old (pre-WW2) hard-cover edition of Jungle Tales of Tarzan, but didn't buy it because it cost $25. You can find a picture of it in a post I wrote about that trip .

Sadly the days of finding interesting vinyl records at a cheap price in a reasonably playable condition at flea markets or anywhere like that seem to be long over, at least round my way. ):
Ah, I remember being spoiled for choice in the 90s - especially early on - when everyone else was getting rid of their records... and now all you can find is old cds that no-one wants!

Sorry to be slow following up, gang, lot going on this week.

HB- great story, I can easily visualize your daughter's expression. And I'd absolutely join you for that Cinnabon...

Groove- wow, definitely an album worth keeping for 50 years! For the cover, as well as the music ("Jingle Jangle" still swings).

Edo- you're right, much of the fun is in the looking. You never know which table might reveal a long-forgotten memory, or an unforgettable oddity (like a 4 foot pink poodle). Or something terrible- one time there were these horrific baby clown dolls. They still evoke shivers.

Sean- perhaps vinyl hunting is like comic hunting. The 'finds' are scarcer, but still possible. As for the CDs, I'm still snapping them up.picked up a B-52's cd just the other day. Hope you find some better hunting luck over your way...

I used to love going to the Flea Market, garage sales and the like. Since the advent of ebay and shows like American Pickers everybody selling even a plastic cup is trying to make a mint. Not as fun for me any longer.

As for passing something up, I remember when my kids were very young they really wanted some ducklings that were at the flea market, I almost caved but held strong.

Killraven- Having spent an 8 or 9 year phase keeping/raising "yard ducks", I can assure you that you likely made a wise choice on that score. . .
You find yourself thinking, "Couldn't we have done something easier? Like have another actual child, even?"

Yes, Colin, I'm pretty sure it's a poodle. Albeit a very unnerving one...

Red, et al... my house is "filled to the gills" with paraphernalia. And I find that trying to sell it off ain't so easy, even with ebay, LOL. Younger folks really are not so anxious to buy Bronze Age comics... LOL.

I do enjoy the "antique shops" still, though. I guess our age group has a toe hold in each pre-high-tech and post-high-tech generation, so I get a kick out old transistor or tube radios and such.

I do seriously regret not getting an old 1930s radio (art deco zenith) a couple years ago. Some guy down the street, in Berwyn, IL, had passed and his wife was selling off all the radios he had rebuilt and refinished as his hobby. I think my wife said something like, "Where you going to put it???" The bedroom wasn't the right answer and that was that LOL!