Redartz:  What is it that brings us here to visit and debate each week? Quite simply, it's a fondness for discussing popular culture, be it comics, television, film or whatever. Waaaaaay back in the latest 70's, long before the availability of these convenient comics blogs, there arose a commentator. And not just a commentator; he was (and is today) a cartoonist, writer, humorist, and storyteller. His name is Fred Hembeck.

I first discovered Fred on the "Daily Planet" editorial pages of DC comics . His little comic strips featuring (and having some fun with) the company's cast of four color characters never failed to elicit a laugh from this reader. So when I saw the Hembeck name on some new magazines from Eclipse and Fantaco (on the shelf of my local comic shop, of course) I grabbed them up. 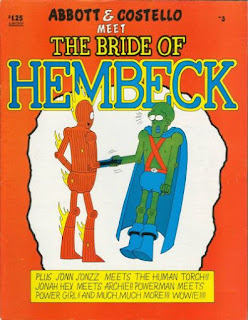 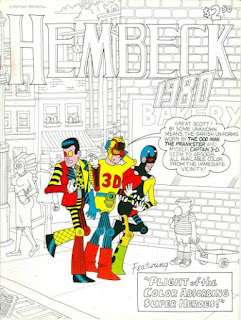 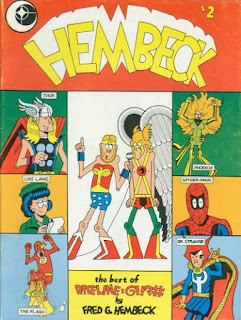 These books not only had comic strips, they also had 'interviews' with various comic characters (with the unmistakable persona of Fred himself doing the interviewing). There were cover reproductions, with Fred redrawing classic comic covers in his unique style. There were stories of Fred's comic fan history (often quite lengthy). And always, the material was covered in a lighthearted, conversational manner. Listening to (reading/watching?) Fred tell of his childhood comics was an exercise in nostalgia. He was describing things I (and many of you, probably) had thought and/or experienced. Kind of like a comics blog, but on paper and with only one speaker (no commenters). 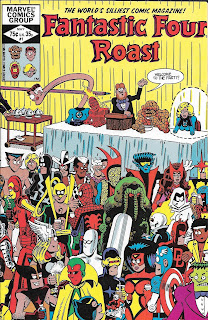 A bit later, Fred was tapped by Marvel to give us all "Fantastic Four Roast", in honor of the FF's 20th. anniversary. Several years ago I did a post on this book over at Doug and Karen's Bronze Age Babies. For anyone interested, here's the link:

That story was a gem. And Hembeck later did more work for Marvel, including Spectacular Spider-Man 86, and even later both destroying and selling the Marvel Universe.  His work  in the years since can be found in many places, having done much more for numerous publishers and publications. 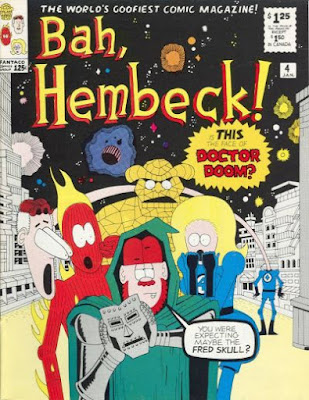 One of those publications is what prompted today's topic. "The Nearly Complete Essential Hembeck Archives Omnibus", published by Image Comics. A copy sat on the shelf at a bookstore last weekend when my wife and I stopped in to use Christmas gift cards. Not having been aware of this volume, and remembering Fred from years ago (those earlier volumes being sold off with the rest of my books years ago), that book was my pick for the day. And a good pick it was. The book lives up to it's name; it's gigantic. Omnibus is right, for those of you familiar with Marvel's various Omnibi. It's going to take a good while to read it all, so I've many weeks of light, amusing reading ahead. 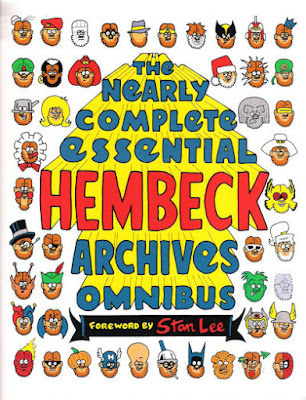 Here's a few pages to give you a taste of Fred's trademark humor. Sorry about the scans, but have you ever tried putting an omnibus in a scanner? 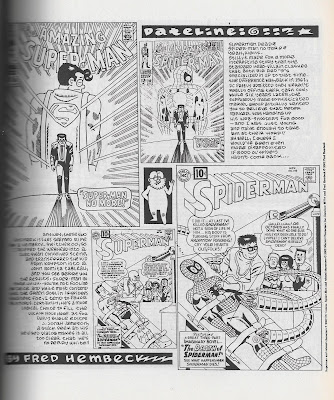 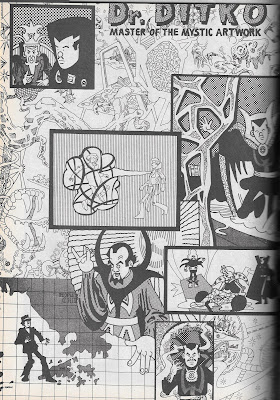 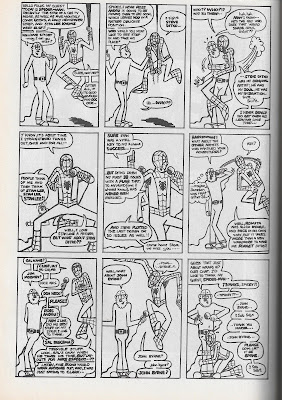 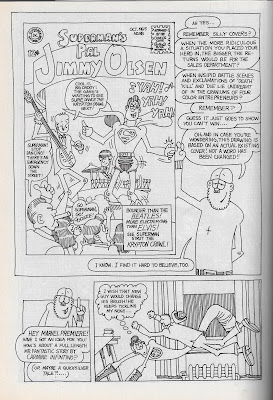 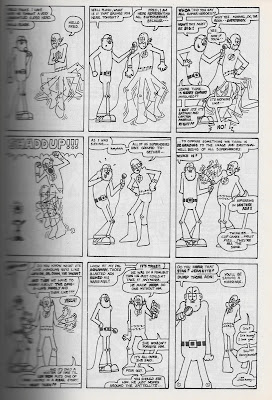 So for any of you who also enjoy Fred's work, or are just now discovering it, let's hear your thoughts. And just in case you might be reading this, thanks Fred! You've got a way with words and pictures that makes the reader feel like an old pal visiting with you for a chat. Well done...

Generally, I like Fred Hembeck's work and enjoyed his one-page strips in various Marvel mags a good many years back. However, I have to be honest and say I found his FF Roast (still got my original copy) extremely tedious. It was an idea stretched much too far. Maybe if Fred had drawn it all himself - nah, it still wouldn't have worked.

Yeah, Hembeck's short cartoons are great, but he seems to run out of ideas in longer form. I liked his DC cartoons from back in the late 70s-early 80s ... the humour was actually pretty edgy for the times.

The World would have been a better place if he ever got the chance to do the Brother Voodoo/Brother Power the Geek crossover.

Can't say Fred Hembeck does much for me, especially at feature length, but the FF Roast is worth a look just for the contributions from Marvel's regular artists at the time (a pretty strong roster in '82).
So Hembeck's main claim to fame these days is that he's the only artist who's had Frank Miller work from his layouts. Which is pretty funny really...

Am I remembering a fandom rumor that the reason Marvel let Hembeck run with so much Brother Voodoo material was because that was the ONLY way the character was going to see print after being dormant for many years, and it would be enough to retain copyright to the name, character design, etc? They were REALLY touchy about not letting ANY character get anywhere NEAR being co-optable by another outfit-- does that ring a bell?

I'm not sure where I first saw Hembeck's work, I guess it was either a Marvel letters page or in the Comics Buyers Guide. I enjoyed the short little strips enough to keep my eyes open for any of his books, eventually getting "Bah Hembeck" and "The Hembeck Files", which I liked, short little stories, humor pieces, fun stuff to read. He had this style that looked amateurish, but at the same time professional, hard to describe. I DO agree with most here though, I wasn't a big fan of the "FF Roast" or "Fred Hembeck Destroys the Marvel U."
Thanks Red for the Omnibus heads up, may have to get that one. I see there is also an omnibus of the Marvel stuff he did too.

Wanted to comment again, but wasted several days trying to track down the source of a quote that I wanted to use.

Now I agree that I thought that sometimes Hembeck's longer works kinda went off track and even wibbilied wobbilied a bit. But that's the nature of humor. The longer it goes the thinner it gets. Even the great Carl Barks had trouble with keeping the gags fresh and involving. His brilliant solution was to reverse what he had been doing. Instead of telling comedic stories with adventuring undertones he did adventuring stories with comedic undertones.

Fred certainly worked well in smaller doses, from single panel to 1 to 8 pages. But that's pretty much a constant with humor. It's a lot easier to do high drama than going for the laugh.

Or as somebody put it: "Dying is easy. Comedy is hard."

My only real exposure to Mr. H was his bi-weekly cartoon (and article?) in the venerable "The Buyers Guide for Comic Fandom."

It was a truly enjoyable bit. Fond memories.

I love Fred Hembeck. I think I first found him in the Comic Reader. He is best in small doses and he always cracked me up with his takes comics and fandom. I owned all his early magazine sized collections. I have his FF roast TPB, but it is on the to be read pile.

Thanks for the comments, crew! I seem to be in the minority regarding "Fantastic Four Roast". Ah well, it's the only example of Fred's "long form" work I've read.

PFG and HB- hmmm, I missed his "Brother Voodoo" also. Actually I missed a lot when I dropped off comics in the later 80s. Apparently it was a "thing"? No doubt someone here can enlighten me...

Sean- your comment about Fred and Frank is pretty amusing indeed...

Flamekeeper- interesting, you saw an Omnibus of his Marvel work? That would probably be a good way to fill in all the above that I missed. Wouldn't have thought there'd be enough,material for an Omnibus there...

Unknown- oh yes, good call on that Comic Reader work. Forgot about that. Anyone else have fond memories of that zine?