Off the Bookshelf: Don't Panic, It's the Hitchhiker's Guide to the Galaxy! 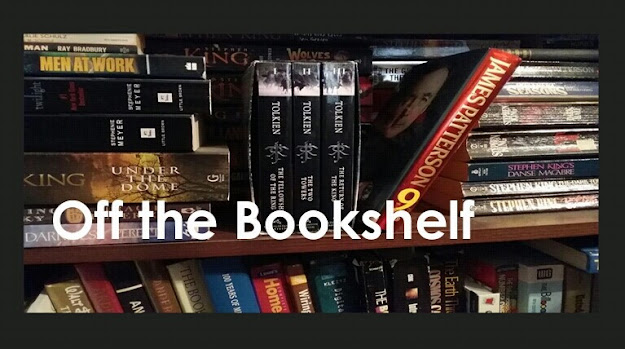 Redartz: One of the greatest Christmas gifts I received in the 80's was a copy of a book called "The Hitchhiker's Guide to the Galaxy". I'd heard of it, but knew nothing about it. I was working as a delivery driver at the time, and had numerous free stretches of time available during my workday, so I took it along to read. I'd read some funny books, even some quite humorous ones. But this tome, within just the first few pages, was the first book EVER to literally make me laugh out loud while reading. People walking nearby probably figured I was off my gourd. They may have been correct, Douglas Adams put me right into space with his brilliant hilarity.

It didn't take long to tear through the first book, and it was impossible to resist acquiring the follow up volumes. I must say, this is one of the lengthiest trilogies ever (as Adams himself was to observe). My workday companions , for several months, were Arthur Dent, Ford Prefect, Zaphod Beeblebrox and the whole crazed cast of characters. Each succeeding book was great fun, although admittedly my favorite remains the first one. Years later I introduced my wife to the "Guide", coincidentally reading to her while again residing within a motor vehicle ( at that time, we commuted to work together, so while one of  us drove, the other read from the book). Maybe there's something about the Guide that lends itself to travel. And no, we didn't bring out towels (if you haven't read any of these books, you probably won't get the reference; suffice it to say that if you ever travel in space, bring a towel: there's plenty of good reasons why).

The "Hitchhiker's Guide" was adapted originally from a radio series, and was later adapted for television as well as a stage play. Oddly I've never seen any of these alternatives, nor heard the audio books (although the one narrated by Douglas Adams himself would be sorely tempting to try). I did, however, have the great pleasure of meeting Adams in person at a lecture/book signing (in the company of none other than Ray Bradbury, what a night that was). Experiencing his wit in person was a treat. Sadly it wasn't long after that before he passed tragically away. Yet his writing remains, and others have carried on the "Guide" series in his wake. As yet I've not read any of these, but will be doing so in the near future thanks to the collected volume my wondrous wife gave me. Will they effectively continue Adams' imagination? Perhaps some of you can help. Have you read any of the books, or seen the shows (or read the comic, another version which surprisingly I neglected)? What were your impressions? Favorite characters (mine was Marvin, the perennially depressed robot)?  This week it's Anything Goes regarding the Hitchhiker's Guide, it's creator, cast, and legacy.

Oh, and if by chance a gigantic spaceship should appear with the purpose of constructing an interplanetary bypass, be sure to grab that towel... 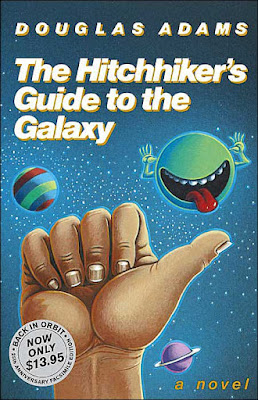 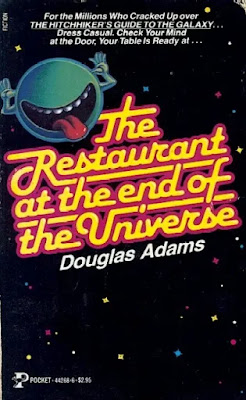 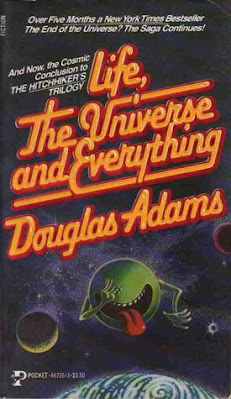 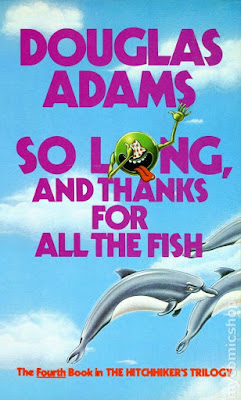 Email ThisBlogThis!Share to TwitterShare to FacebookShare to Pinterest
Labels: Douglas Adams, Hitchhiker's Guide to the Universe

I almost wrote "My wife's favorite is Marvin, the Depressed Robot" without even asking her. So I dutifully asked her. And of course she immediately responded, "The depressed robot..." Heh-- 31+ years, folks!

One weakness in the canon-- there's a female character, right? I can't remember her name for the life of me. . .

dangermash aka The Artistic Actuary said...

If we're going to talk HHGTtG...

Have you heard of the Euler identity?
e^(pi*i) +1 = 0
A candidate for the greatest formula of all time because it's a relationship between the five most important numbers in maths, all of them appearing just once, with no other numbers in there.

Well, that's old hat these days. The Mills-Adams identity does the same for the six most important numbers in the universe:
e^(42*pi*i) - 1 = 0

If there are any mathies out there that could confirm this formula is true, that would be good. And if there's anyone out there doing A level maths, try challenging your teacher to link together the six most important numbers, but don't tell them what they are.

I know where my towel is, and recall enjoying the original HHGTTG radio show back at the end of the 70s, so much so that I saved up to get the lps of the first series.
That was the format Adams wrote it for, and its definitely the best version. The humour is more immediate than the book - for instance, Marvin's dialogue is much funnier with the actor's deadpan delivery - and its immersive without being limited by someone else's visuals. Plus you get the Radiophonic Workshop doing their thing.

Redartz, I'd strongly suggest you go for recordings from the radio rather than Adams reading. In fact, I'll make it easy for you - heres a link to the whole of the second lp, The Restaurant At The End Of The Universe.
www.youtube.com/watch?v=SguL_w2Oerw

Sorry, but no-one seems to have posted the previous double lp set that corresponds to the first two thirds of series one.
The albums involved some re-writing and a fair bit of re-recording - with the original cast - that really improved on the radio, but all the BBC episodes are online so if you'd rather start from the beginning...
www.youtube.com/watch?v=xSTj1vbiP4Y

Fwiw, the later twenty-first century runs didn't do it for me at all...

PS My understanding - such as it is (ie not much really) - is that the Euler identity is true, but no-one can explain why. I blame the Golgafrinchans.

HB- yes, like your wife, mine also is drawn to that moping robot. Oh, and the woman you were referring to is Trillian, aka Tricia McMillan; correct? Hung out with Zaphod...

Dangermash- boy, you stumped me good with those equations. And I'm generally pretty fair at math. Obviously not that good. But as long as they result in 42, perhaps everything is hunkydory.

Sean- it's reassuring that you can locate your towel. And many thanks for those links. I'll definitely be looking them up, and in the proper order (such as it is).

I listened to the radio series when it was first broadcast and loved it. I also enjoyed the TV series, even though it had BBC-standard special effects.

I've never bothered with the books or the movie, as, once I'd heard the radio version and seen the TV version, I felt I didn't really need to experience it in any other formats. There's a limit to how much of one thing I need to experience in one lifetime.

Douglas Adams was also in charge of Doctor Who at one point. It's not an era of the show I have any huge fondness for, as it was too frivolous for my liking but his story City of Death is often voted the best Doctor Who story of all time and possibly worth a view for any who want to experience more of Adams' work.

It became a slog to finish, which we did as we'd committed so much time to it (we weren't expecting to do anything with it, we made it because that's just what you do when you're given to doing those kinds of things), but it was a slightly dispiriting experience.

I'm currently enjoying a repeat broadcast of "Hordes Of The Things", originally a radio serial from 1980, which was intended to do for fantasy/sword & sorcery what Hitchhiker's did for sci-fi but lightning didn't strike twice and the idea was abandoned after just one series of 4 episodes (abandoned on a cliff-hanger too!)
But I love "Hordes Of The Things" - the fantasy genre lends itself perfectly to spoofing and this very funny series spoofs JRR Tolkein, Ursula Le Guin's "Earthsea" novels etc.