Redartz:  Some of the first comics I ever read, and loved, were Walt Disney books featuring the adventures of Donald Duck, his nephews Huey, Dewey and Louie, and Donald's financially obsessed Uncle Scrooge McDuck. These stories grabbed my youthful  imagination, and held me fast even through the teen years and on into adulthood. Indeed, there were times when I stopped buying superhero comics, or dropped Archie comics, yet still maintained interest in these Disney Ducks. And much of the reason for that was the gargantuan influence of Carl Barks.

Carl Barks was the writer /artist for Donald Duck for decades, and was the creator of many beloved Disney characters, particularly Scrooge McDuck himself. Barks' storytelling skills are the stuff of legend; going way beyond the limited 'gag strips' that were found in some "funny animal" books. Barks told humorous tales, cautionary tales, morality tales, and usually with a hefty dose of adventure. How could any kid resist titles like "Ghost of the Grotto", "The Cave of Ali Baba", or "The Lost Crown of Genghis Khan"?

And the cast of characters Barks weaved into his 'Duck Tales': the Terrible Beagle Boys, Magica DeSpell, Gyro Gearloose, Flintheart Glomgold, just to name a few. Barks gave each character a unique voice and personality, and gave the world of Disney's Ducks a level of characterization rivaling that used later by Marvel. And that characterization certainly applied to the main cast: manipulative Scrooge, bemused Donald, and the nephews (who generally seemed the most rational and capable of the whole family).

But there was much more to Carl Barks than just his writing. His artwork is equally legendary; not for nothing was he known as "The Good Artist" (for years there were no credits for Disney creators, but his rendering stood out from the rest earning him that sobriquet). Barks was unparalleled at giving emotive expression to his characters. 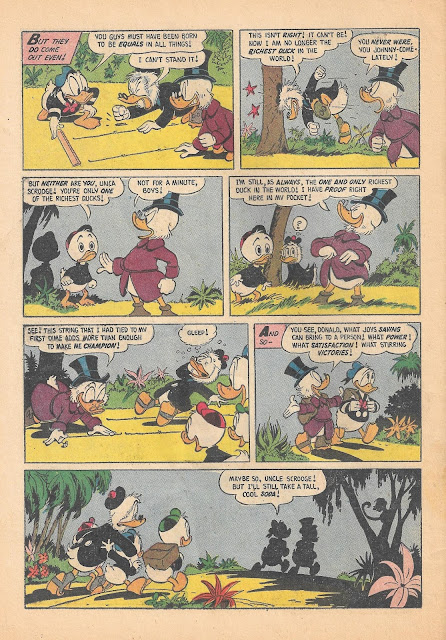 He also excelled at , well, basically everything. He could beatifully render dramatic scenery, 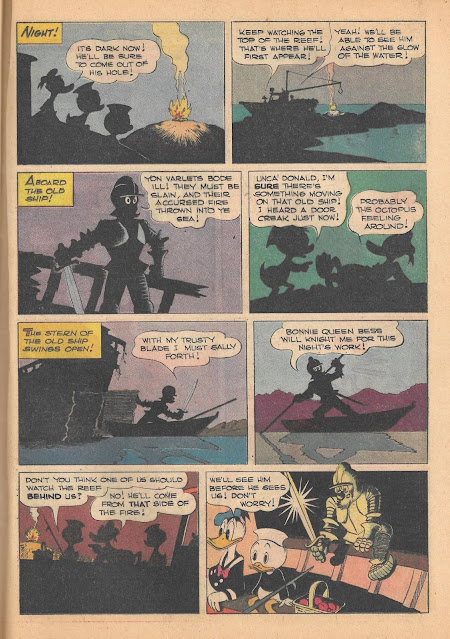 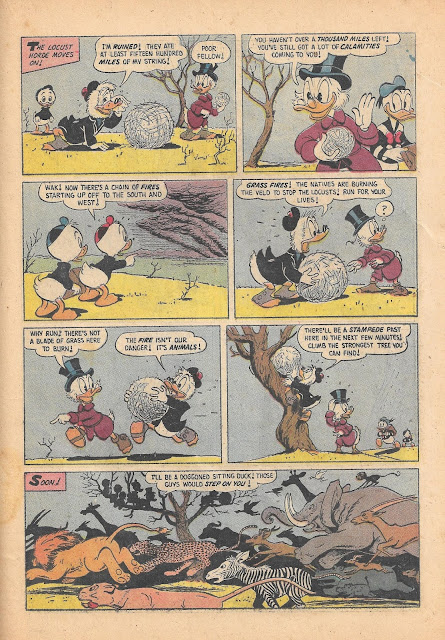 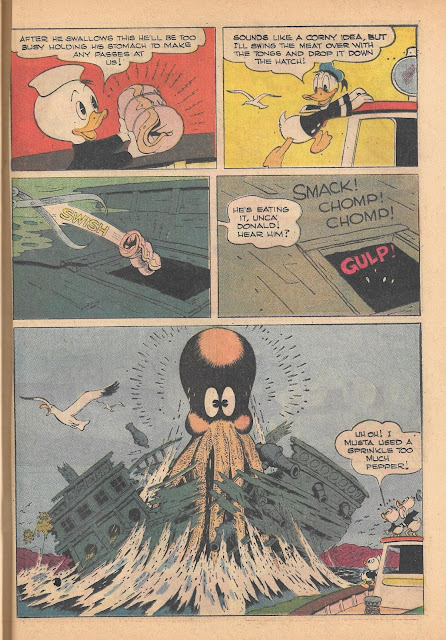 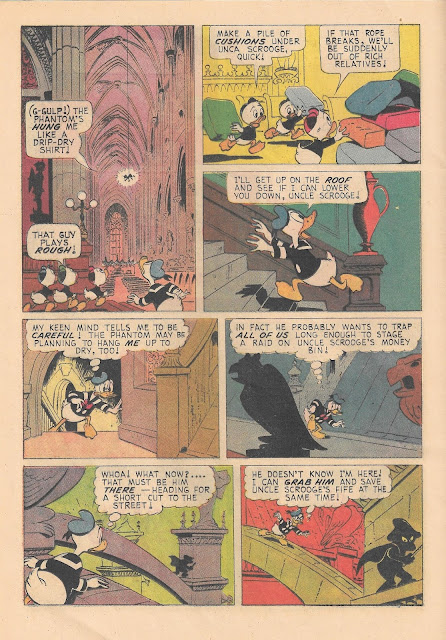 There weren't many humor books in which you found artwork that you could pore over and admire, regardless of the story. Barks' work, in that regard, puts him among the greats of the comics genre: Eisner, Kirby, Wood. And I'm not overstating things here; Barks' work has stood the test of time. Each generation rediscovers these great stories. In the bronze age, we had Gold Key and Whitman. In the 80's Gladstone Publishing kept them in the comics shops. Still later Disney itself published the books, and today we have Boom! and Dark Horse.

And what's more, there's more to it than simply representing the genius of Barks' work. Another artist/writer, Don Rosa, took on the Duck reins (where would one put reins on  a duck?) in 1987 and brought a whole new tradition of excellence to books like Donald Duck, Uncle Scrooge and Walt Disney's Comics and Stories. Like Barks before him, Rosa worked with intricate storylines and equally intricate artwork. I've come to love Rosa's work too, to the extent that I'm currently awaiting delivery of a copy of Rosa's magnum opus: "The Life and Times of Scrooge McDuck"; a two-volume biography of the famous curmudgeon extrapolated from the whole history weaved by Barks. "Life and Times" won an Eisner for best story some years ago, and I'm finally going to enjoy it.

Which brings me to one final point: the availability of the Disney Duck stories. One great strength of Gold Key was the variety of formats they used to present these comics. The regular comic series were supplemented by Digests, Giants, and large format collections. This practice has continued to the present day, as we have unprecedented access to finely bound collections of Barks (and Rosa's) works. 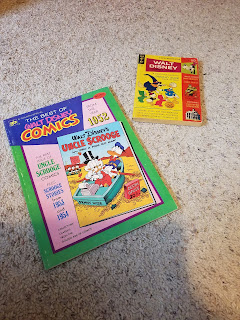 To sum up: my love for the Disney ducks quite literally continues even today; a common reading thread that took me from childhood to grandparenthood! And chances are many among you are also fans of these books. Which is one way of saying it's time to hear from you; what are your thoughts about Donald, Scrooge, their creators, comics, casts, and all the rest? And while you compose those thoughts, here's some covers from the whole range of Duckdom... 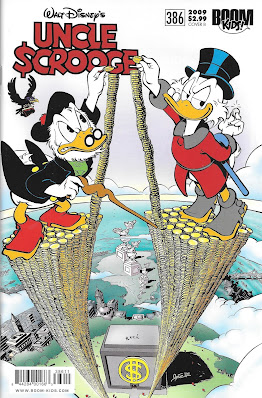 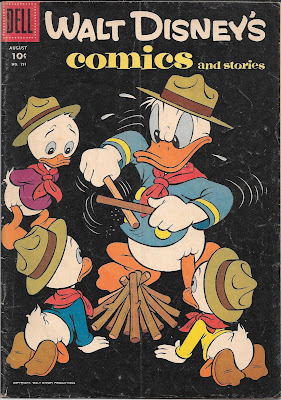 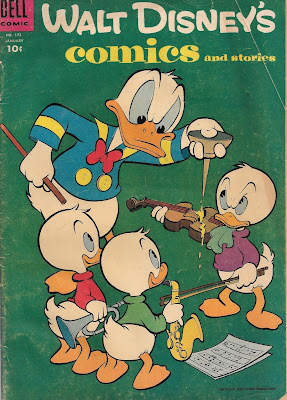 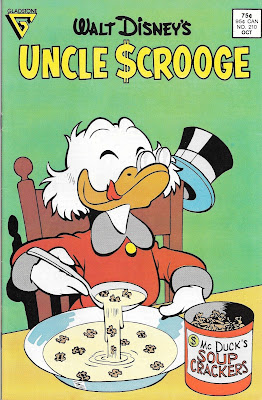 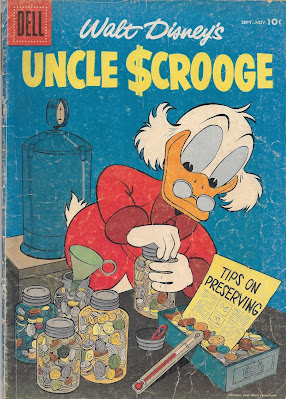 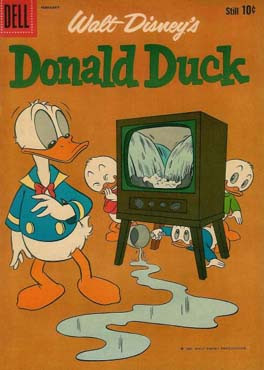 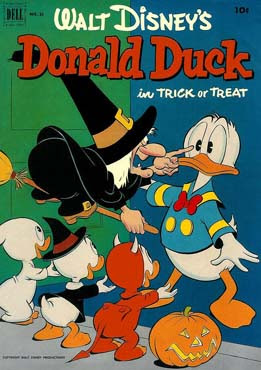 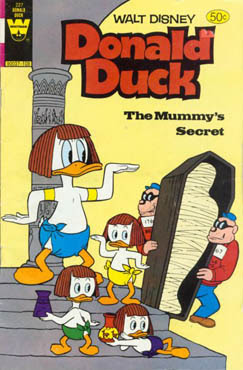 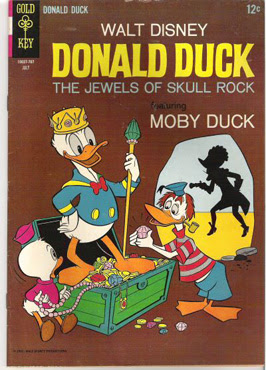 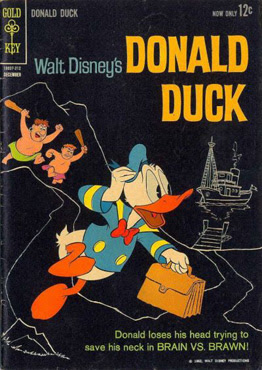 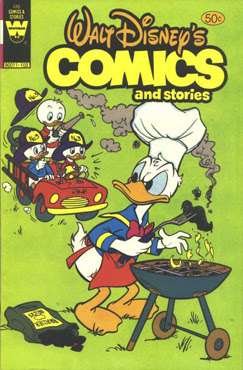 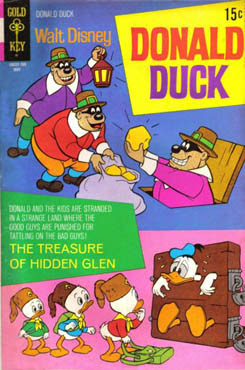 Re: "where would one put reins on a duck?" Same place as on a horse.

Nice post Red; I'm of a similar opinion about Barks and the Disney ducks stories he did. Unlike a lot of folks, though, I came to the Disney comics (and the Archies) *after* I first discovered superhero comics. And for a while that was most of what I read (from roughly the end of third grade to just before starting fifth grade).
It's interesting that all of the stories I liked the most and remembered the best (and sometimes re-read even in my teens long after I had stopped buying funny animal/Disney comics) were indeed by Barks - although at the time I had no idea who he was, as I only learned about him once the internet became a thing.
I have to say, though, on the subject of availability: yes, there's a lot of magnificent reprint volumes collecting all of the classic Barks stories, like the Fantagraphics hardcovers, but man, are they expensive. Back in the 1970s, they were just reprinted in regular Dell/Gold Key spinner rack comics, or digests, with the most expensive being those handsome Whitman books with the cardboard covers and higher-quality paper stock (with the hefty 79 cent price tag).

By the way, I also have Rosa's "Life and Times of Scrooge McDuck". My copy is the paperback that collects the whole series, which I bought on the cheap (the equivalent of about $10) from a local seller on a comics auction site. At the time, the lowest price for that particular book on, say, eBay, was $70-80. I also found a pretty inexpensive copy of the Companion book. Needless to say, they're still waiting to be read...

My only exposure to Donald Duck comic-strips was in a British weekly called 'Mickey Mouse' in the '70s.

Well, I came to appreciate the Duck and Barks as I did EC Comics: the relentless accolades week after week in the The Buyers Guide for Comic Fandom.

And whereas Russ Cochran launched a line of faithful $1 reprints of EC Comics in the mid 1970s I think I had to wait until Gladstone Publishing did the same. But I think Gladstone's books were at roughly 50 - 60 pages, for a few dollars a comic, starting in the mid-80s?

So, I surely did buy some of the Gladstone repros and they lived up to the accolades. The art, the story plots, the incredible development of the characters' personalities... WOW!

I mean, they really were true gems.

Some folks really batted above the average in the world of comics and not just in their capacity as an artist but also the ability to tell a story!

Foster with Prince Valiant
Cole with Plastic Man
Eisner with The Spirit
Barks with the Duck!

Edo- yes, some of those reprint volumes are mighty pricey. You probably did better than I budget wise, but my incoming "Life and Times" includes both the editions you mentioned. I'll give you a review upon finishing them, but doubtlessly the books will be phenomenal.

Colin- so were Disney comics only available in the UK as weeklies? Or did Dell/ Gold Key have any distribution there?

Charlie- as you mentioned, the Gladstone editions were nice. Good quality paper and printing. Have you ever read any of Rosa's stories? Bet you'd enjoy them. And although I'm not familiar with the creators, the Boom!comics were solid too. It's a telling phenomenon that when I hit my LCS, the 'kids' books are my first stop (still love "Scooby Doo Team up ")...

Red, Disney comics in the UK would have been weeklies because all comics aimed at kids were weeklies. The British Disney comics were reprints of the US comics but in a weekly format (however I remember 'Mickey Mouse' comic being in colour unlike Marvel UK's reprints). I don't know anything about Dell/Gold Key distribution. One of my school-friends had a letter printed in 'Mickey Mouse' comic.

I used to buy the occasional Walt Disney Comics and Stories that had those great stories in them. I've always intended to buy some of the Barks collections, but never have done so. I would love to have them along with the others CH47 mentioned.....plus the Tintin series. When I was in junior high, there were two or three hardcover collections of Tintin stories that I read nearly every day in Study Hall. The Barks stories always reminded of those with the international intrigue and exotic locations.

Colin/Red: You could certainly pick up Disney comics from Dell and Gold Key in the late 60s early 70s (possibly beyond) as I had a few of these .In UK there were a few Disney comics the most famous being as Colin noted Mikey Mouse weekly and the larger sized Disneyland .

Never read too much Disney stuff, but I was aware of who Carl Barks was thanks to CBG.
Around, I think, 1985, I was at Disney World Magic Kingdom, going into the Townhall looking building to get some info & who's there drawing? Carl Barks, doing free sketches, I was like "What? I gotta get me one" unfortunately he was already booked, the "castmember" said these guys just pop in, no schedule or anything like that, you just have to be lucky.

Graham- nice reference to Tintin. Those stories did share a sense of exotic international adventure with Barks' output. Both are very entertaining reads!

McScotty- thanks for the added info on UK Disney availability!

Flamekeeper- Great story! I haven't heard much about Barks doing signings or sketches. Fascinating that he did so at the park, and for free! That would have been great luck indeed...